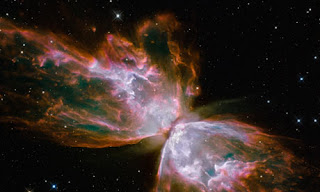 I regularly go to science and technology sites to see what is happening in the world of science. I need to do this to send anything new to a couple of students.

It also supports the atheist part of me by showing what really is, rather than the fantasy world most people build in their heads! My family included!!

I saw these wonderful views recently taken from  the Helium balloon sent up by an amateur and one from the Hubble telescope showing something that we didn’t know before about the birth and expansion of the universe – it is the one above on the left.

I am cleaning out my files and folders before I leave for the USA, and found them so decided to share with you. What wonderful scientific times we live in. Unfortunately religion is still looking backwards and being used as an excuse for things like mass-murder.  Enjoy the simple wonder of science and the universe existing independently of the small creature called human being who scratch on its surface.