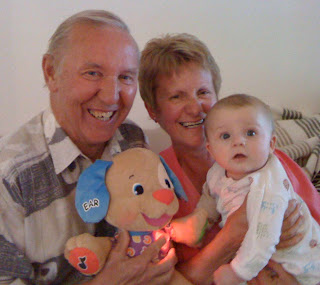 They left to visit family just after I spent my first weekend with them in Cas. I got an e-mail when I was in the UK saying they were okay, had an interesting stop-over in Bangkok and were on route to see Paul and Beth in New Zealand. This they did and then flew to Sydney to see Daniel and then to Melbourne.

They are staying in Melbourne in St. Kilda near the beach. They are near to Peter and Rebecca and to the latest Bateson…….roll of drums, spotlight and enter…..Jake!  Here you can see him in the tender hands of Lynne while Opa Alan plays with one of his toys. Great …. now put the toy down Alan!

They said the weather is better in Melbourne than in NZ or Sydney (time to move Daniel!) they are having a great time and then Alan added he had been to the Yarra Valley Wineries but didn’t drink anything. What! You could have told them to ship me something, Alan!  Now to the photo. More please.