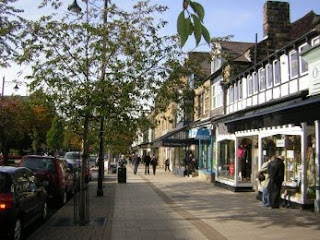 I had a number of days in Ilkey with family or on my own. It is on the other side of ‘Nab End’ mountain in the River Wharfe valley. Silden is on the other side of the mountain in the River Aire valley. Ilkley had a lot to do with my mother’s family for hundreds of years. Between Ilkley and Harrogate were the farms and land owned by her mother’s family for hundreds of years. The family grave is also in Ilkley, near the curve in the river in the valley bottom.

My mother always liked going there with friends, or with her sisters. It was something special. Visits ended with tea and cakes in ‘Betty’s Traditional Tea Rooms’ on The Grove. The family jewellers, Phillips & Son, was near to Betty’s and it was there that my mother and grandmother had my signet ring made for my 16th birthday. Ah….memories! 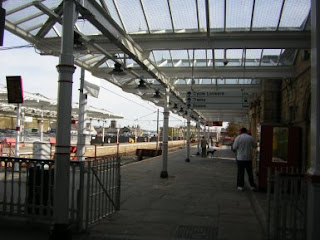 When I was 16 and studied at Leeds I would sometimes spend Saturdays in Ilkley. This included going to the local Picture Palace and buying my first posy outfit of tight on the leg Italian trousers, shoes with pointed toes, a short brown raincoat with belt and a short brim trilby hat! It was very ‘in’ then! It still didn’t manage to get me a date with Vera Potter at college, with whom I was madly in love. 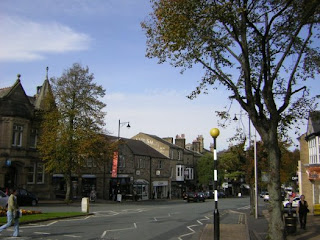 My visit with Fran and Geoff was interesting for they took me to the relatively new Senior Citizens Centre  overlooking the central car park.

We had a light lunch and I wondered around. It reminded me of the ‘Oldie’ Centre I go to each Friday afternoon for my Photoshop course led by Stefan. If I lived in Silsden I would certainly go to activities at he new centre at least three times a week.

I bought some books at a shop on The Grove and a copy of Private Eye and was pleased to see it hasn’t changed over the years. One of my later visits was with Andrew and family. Always nice to return to Ilkley. I took photos of the centre including the railway station, town hall and library and The Grove.