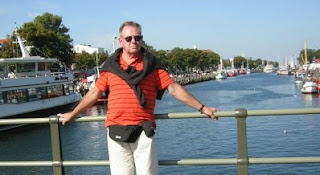 A late summer day in Warnemünde

What to do? A day in Warnemünde planned with Frau Bohrmann and her ladies then cancelled at the last moment due to family visits and grandchildren. Hermann and I decided to press ahead with the plan even though it would cost more and so we set off for Rostock last Saturday. It is an important port and ferry harbour on the Baltic coast which the Germans call the ‘Ost See’. 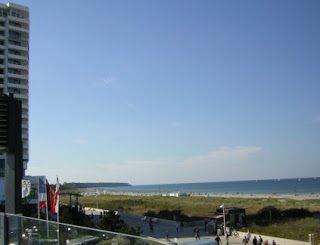 Nearly three hours to get there then an S-Bahn to Warnemünde, which is a very nice holiday centre right on the coast. The weather was sunny and warm with blue sky. A perfect late summer day. I posed in front of where the mouth (Münd) of the  river Warne flows into the Baltic sea.

We walked through really nice old areas with narrow streets and interesting old shops and restaurants until we reached the coast to the east of the river mouth. There is a large hotel and lots of beach area and also a ‘Kurbad’ Restaurant. Hermann said it was very much in demand in the DDR and difficult to get a table. He wanted to have a meal there again. 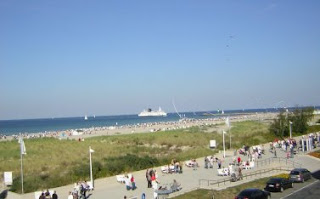 It was a disaster! We sat on the outside terrace where I took all these photos and then waited and waited for service. Eventually we get a beer and then waited and waited for a menu. After nearly an hour I just walked out and went to a local restaurant. I didn’t pay for my beer! Poor Hermann sat there in the hope of service and when it didn’t get any better he sadly left and went for a paddle along the coast.

We met there after I had enjoyed a very tasty (local) fish dish and good service. We walked along the shore and then down the river area, which has lots of shops and different places for food. He is an ice-cream freak ( I don’t eat it) and so he relaxed in a nice Italian style ice cream parlour and overdosed on ice creams served with fruit and cream topping. I just had a coffee and thought about the fish I had just enjoyed. From there we wandered back to the station and the train to Berlin, arriving home at 10.00 pm.

A nice day inspite of the terrible service at the first restaurant. Alas, this is just one of the things that superficially appears to have survived from the DDR, but which lives on its name and in reality doesn’t deserve to be in business. Not a nice lesson for poor Hermann to learn!