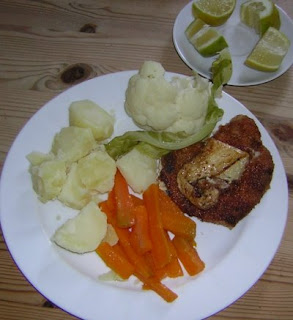 I cooked Sunday lunch a week ago. It didn’t turn out as expected. Instead of Oldie Hermann cooking when I visit him I decided to cook and invite him to my palace, but I had to cook something rather traditional. I had no idea so Hermann gave me a list of things to buy over the phone and off I trotted to the shops.

Problem was that is was Saturday morning when the greengrocers close at midday so I couldn’t buy all the things fresh. I got the main ingredient called ‘Wachsbohnen’ (translates as Wax Beans) which I had never heard of. Finally got them in a jar. Later that night I knocked the jar onto the floor and it broke = all beans into the rubbish bin.

Fortunately I had some cauliflower and fresh carrots as back up so I changed the menu a little as you can see from the picture. I added gravy after I had taken the picture in case some of you are thinking that it looks rather dry. It tasted nice and Hermann ate all his portion!