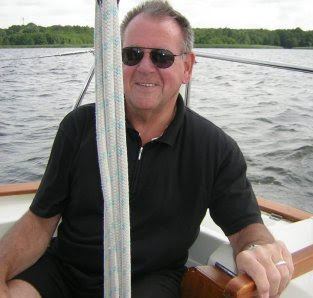 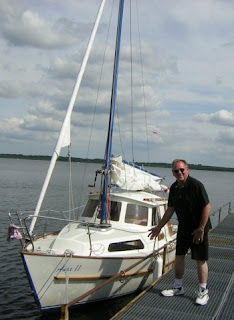 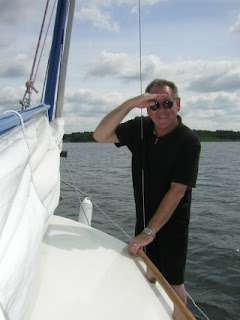 Had a great day on the water today. The background is that ‘oldie’ Rolf damaged his left arm trying to get his boat trailer onto wooden 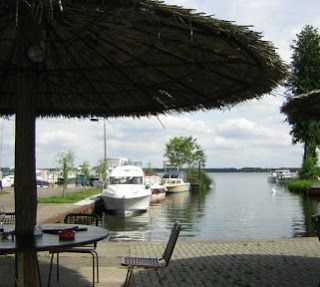 supports and his wife could not help him, nor his family for they are all on holiday at the moment, so he called me. Help, John! ‘No problem’, said I ‘But I want a gallop around the lake in exchange for help’. ‘Done’, said the captain!

He picked me up and we drove to the south of Berlin, in the direction of Storkow, where I went a couple of weeks ago. We arrived at Walsige See (Walsig Lake) where he keeps his boot. Lots of chopping and sawing of wood by me and then jacking up the boat trailer and putting wooden supports underneath and banging around and then …. success! Big smiles around then we drove 1 minute around the water to arrive at the boat.

I fell in love with it immediately. It was built in Poland where he bought it in 1996. Classic design to which he recently added a Yamaha outboard motor which has more power than the original. We removed all its covers and put the motor on and gently eased our way onto the lake. I was on the rudder as you can see on the photo and steered it through the posts into the lake. At least I had not forgotten my sailing/rowing lessons from Sweden in 2003.

I steered it into the middle of the lake where we switched off and had coffee and cake and a chat ( mainly about his 10 grandchildren which is a common theme with ‘oldies’) as the boat gently drifted in the wind and current. I then steered into the wind so that Rolf could unfold the two sails and really get into sailing. You can’t make this switch without sailing into the wind and turning off the motor as the sails take over. I had a fabulous time sailing it across the lake and then suddenly ‘tacking’ so that we turned against the wind and headed back from where we had sailed, and all with wind and sails and no motor. I really enjoyed it and hope you can see this on my face.

Later we eased our way onto a berth at a restaurant on the north of the lake where we relaxed over a beer and Zanderfillet, caught in the lake I was told, which melted in my mouth so I believed this claim. More sailing and tacking until evening and then slowly to the berth and secured the boat. Drove back to Berlin and I got my tram with the promise that we would go sailing again. I hope so for I had one of the best days I have had so far this summer. I took a few photos of the day including one of Herr Kapitain and the view from the restaurant as we ate our fish.