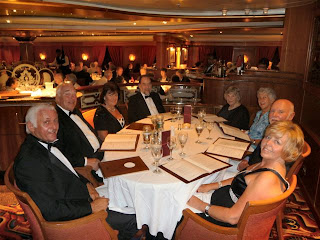 What is happening in April?

To start the month I have a nice pic of cousin Barry, and his charming wife Pam, ‘slumming it’ on a cruise through the Caribbean. Very nice for some! They are the attractive couple at the very front of the photo. Hope you remembered how to pick up peas with your fork, Baz!!

Birthdays in April
Horst starts the month with his 75th on the 4 April – pity he has to go for an operation a week later, so get well soon Horst.

This is followed by Dennis celebrating his 54th in California with his wife and sons this year on Saturday 11 April. Three people follow him on Easter Monday 13th April and they are Neil at 52 celebrating in Essen, Ulli at 62 celebrating here in Berlin near the Mugglesee and Marga who will be 61 and having a party in Berlin-Charlottenberg.

Mathias, my business partner will celebrate his 45th on the 19 April with Sylvana and family. Peter will also be 45 but on the 22 April. No doubt he will celebrate with Andre and friends in Alt Landsberg. Our very own Dr. Birgit will be raising a glass for her 45th on the 24 April and Katrin ends the list with her 41st on the 28 April. Happy Birthday to each and all.