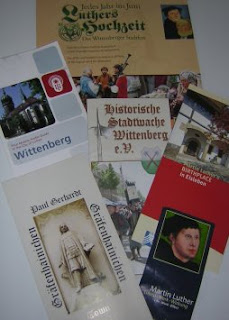 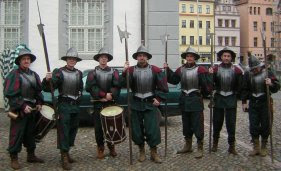 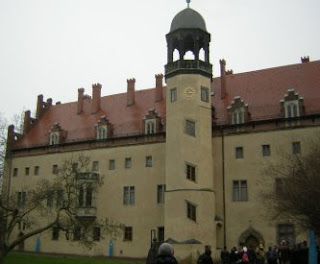 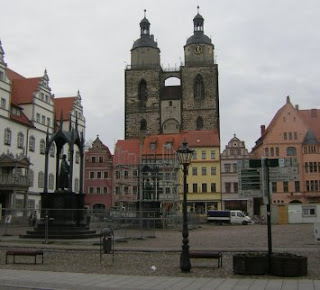 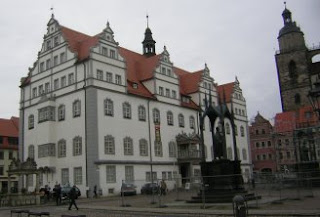 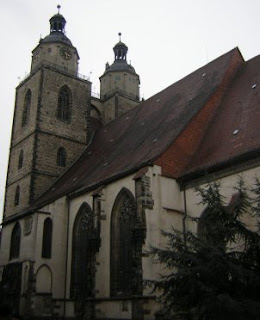 I had an interesting time in Wittenberg yesterday 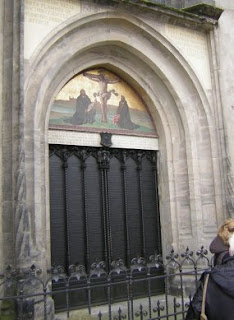 I went with some oldies to see LutherStadt Wittenberg, which is an hours train drive south of Berlin. Luther was born in Eisleben, about 60klm to the west, in 1483 and died there on a visit in 1546. He is famous as the ‘founder’ of the Reformation and is closely identified with the town of Wittenberg, where he spent most of his life.

The town is dominated by three buildings. The Schlosskirche, (Palace Church) with its famous door, where he is said to have nailed his 94 theses, in 1517, attacking the papal trade in indulgences. The building is now dominated by the tower with the words ‘Mein Gott ist ein Festes Burg’ at the top. It was built when the town passed into Prussian authority, and commemerates Bach’s setting of these words in a famous cantata.

The second is the Stadtkirche (City/Town Church) ,with its twin 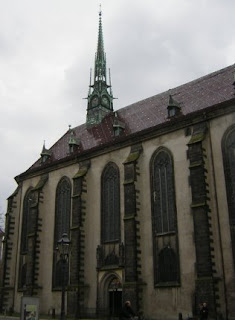 towers, which overlooks the Marktplatz (Market Place) containing the statue of Luther in front of the Rathaus (Town Hall).

The third is Luther’s House, which was given to him by the local king after Luther married Katharina von Bora in 1525. It is now a museum. In my photos it is marked by an outside circular staircase in the middle of the building.

The town in well worth a visit if you ever come to Germany, and if you are in Berlin it is worth taking a train for an interesting day in a town which played an important part in German history.

There are some interesting dishes to taste and the beer is excellent!