I went to the Kirchner Exhibition yesterday

I went with Oldie Micha and we had a great day. I got the tip from Jutta in an e-mail. The e-mail was about having a nice big German breakfast with her and her husband, Gerald, next Thursday morning. She is my ex-boss at the bookshop project and has now taken early retirement. Everyone sad for she is sorely missed. Nice that we have become friends and so exchange tips such as the Kirshener Exhibition and meet up for breakfast. 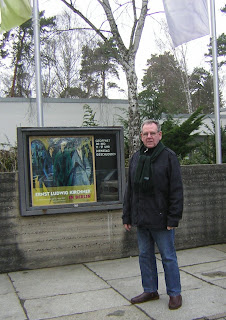 Ernst Ludwig Kirchner is mainly famous for his black and white impressionist drawings from 1910 t0 1930, particularly of the female form. The Nazis banned his work when they came to power and Kirchner killed himself in 1938. He had lived in Switzerland for a long time and was known to be ‘depressive’, before the decision to ban his work.

You must see his work in the context of the time and understand something of the history and art of Germany from the early 1900s. I really like his style and remembered seeing some of his work in the National Gallery in Berlin. Something about his style reminded me of my favourite, Otto Dix, who was producing his best work a little later, and with harder political criticism. Dix’s work was also banned and he was placed under house arrest, but did not kill himself.

Micha and I later had a really good lunch in a local German restaurant before sipping coffee in the very different surroundings of Kreuzberg. Here is a pic of me at the entrance to the exhibition.