Saturday with Ian and Birgit

We last met in Berlin in the summer of 2007 when they relaxed in my garden. I also have some nice photos of that meeting. It was the first time I had been to their flat in a quiet area of Kensington and Chelsea. They own the property and rent out the shop and downstairs flat but their flat at the top is nice and light with lots of views of the sky and clouds. They have an aged white cat losing its sight. Ian looks after her all the time. It came to me, sniffed, realized I was not Ian and wondered off to find him! 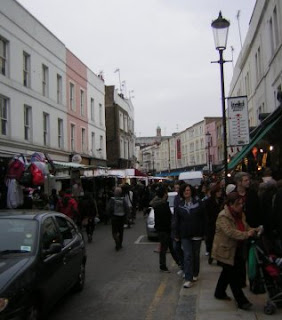 They took me on a tour of their district which was very interesting. Two streets to the south is Portabella Road with its market. Here is a photo. From there we wandered off and found ourselves in front of their Fitness Centre. They are both very active at work and also keep fit with three visits a week to their gym. Birgit’s idea of fun is learning to jump out of a plane with a parachute! I jest not! They also ski and try to get to a piste each winter. Here is a pic I like of them in 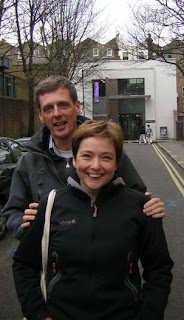 front of their Fitness Centre. From there we wandered on and ended up in a restaurant serving Chineses food but in a way I have never seen in Berlin. It was full and served an interesting array of dishes. They seemed to be regulars and could use chopsticks with great ease. I can’t, but that could be because I don’t really like Chinese, or food from other ‘far’ eastern countries. 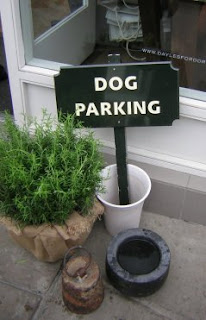 After, I bought some things for Liebe Andrea and ended up in Holland Park. I took some pics for my Friday Photoshop ‘Oldie’ Group, including some of Kensington Palace at one side of the 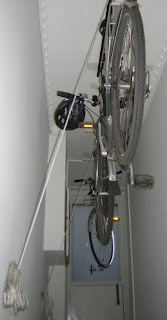 park, and the large villa type houses nearby where some of the world’s super rich live when they are in London. We moved on!

Heading back we entered a nice area with some interesting shops. One was for designer jewellery but with no prices. Ian added that if you need to know the price then you should not go into the shop! Later we found a bistro-cafe and with an amazing sign at the entrance. I saw English used in a way I had never seen before and so have sent the picture to my teachers’ group in Berlin.

Back at the flat I noticed their solution to ‘parking’ their bicycles. They hoisted them to the ceiling – not a bad idea when the passage is narrow. We chatted away and sipped a glass or two of white wine before I got ready to leave for Adrian’s ‘big’ party. It was around the corner and so didn’t take long to get there. Thanks Birgit and Ian for a memorable day.