I had a great time in London last weekend

As you know from my last post, I flew to London last Friday morning and returned last Sunday evening. I flew with Ryan Air for the first time and cannot recommend anything about it. It was cheap but there is nothing else to say for it. I think it is the equivalent to ‘Reality/Celebrity TV’ with wings! 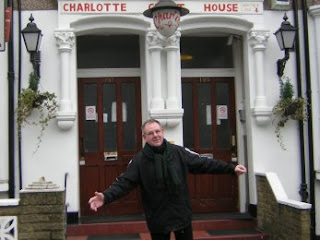 I shall tell you about it in a series of posts with photos. The reason was to attend Adrian’s 50th Birthday Party and to see Ian, Birgit and Sarah again. A strong Sussex University theme ran through the meetings and groups = most of us met there! And, Adrian and Tanja played a major role in my moving to Berlin. 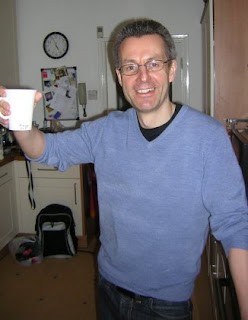 I eventually arrived at my Guest House which shared a name with Adrian and Tanja’s daughter. Yes, Charlotte and she is also my god-daughter and hadn’t met since the family left for London twelve years ago. Here is a pic of me outside. After tracking down a branch of my UK bank I got some money out and did some shopping, had a snack and slowly returned to West Hampstead to my Guest House. 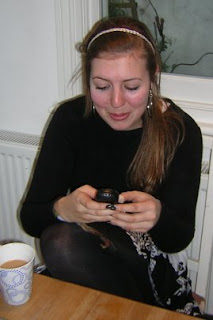 Later I walked the 10 minutes to Adrian and Tanja’s house and we had a great reunion. Tanja cooked and I had a relaxed meal with all and we caught up on news. I wanted to meet like this for the next day I expected we would have little time to talk, given the number of guests at his party.

Here there is a pic of Charlotte trying to sort out my English mobile phone, one of Adrian with a mug of tea in addition to a couple of me.

Next day was just as good!