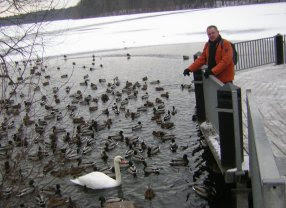 Now who has a birthday in January?
Peter Lee will be 50 on the 5th – but then he has also slipped off the radar lately even though he swore he would always keep in touch at the end of uni days. Na ja, und Prost Peter. Have a great day.

Daniel will be 24 on the 9th, Hannelore in the south of France will be popping the champer corks on the 12th – which is exactly the day when I bought my first Asus laptop three years ago, and which I am using to write this update!

Caroline will be 23 on the 20th, and Harald Porsch will be smiling all day on the 21st when he celebrates his 45th. Peter von Longlegs will be opening his cards on the 24th to discover he has reached his 25th.

Paul (The Wanderer) Bateson will be 24 on the 27th – nice to see him back safely after his gallop around half the world in 2008. He will be celebrating in the arms of the lovely-eyed Beth in Liverpool. Larissa, in Bernau to the north of Berlin, ends the month with her 46th birthday on the 29th of January.

Happy Birthday to each and all!