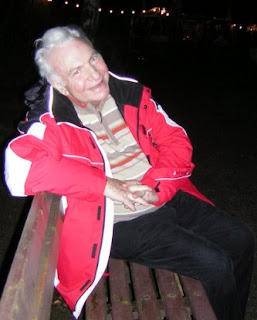 Something strange happened: Herman allowed us to take a photo of him!

Just found this photo so I return to the topic of the walk which started the month. At the end of the walk around the lake, we all relaxed at the village fair-market and to the surprise of all who know him, Hermann announced we may take a photo of him.

Shock all round for normally if you even so much as try to take a pic of Herr H. you are threatened with a thrashing! Quick gallop to find cameras before he changed his mind and so I took a couple of snaps.

I think he was being unusually generous because he was ‘tired and emotional’ (This was a phrase used by Private Eye to say someone was drunk!) having consumed considerable quantities of the hot spicy ‘Glühwein’ ( in English this is called mulled wine and drunk almost only at Christmas) at the lakeside stop before we got to the market-fair.

He came round yesterday after working at the museum and joined Micha in learning something about computers and the internet on one of my machines, mainly about the security programmes we all unfortunately need these days. The first time I went on the internet there were no virus dangers or spying programmes. How things have changed.

They are coming round on the 25th December in the afternoon for a bite and a chat. Hermann has to work on that day so will probably enjoy relaxing here. I may even cook but have no idea what at the moment.