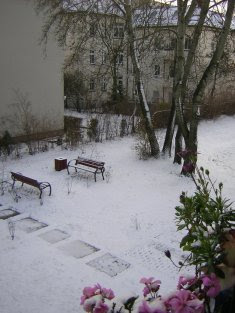 It snowed and Jan and I saw Bond

Nice to see snow falling in Berlin for it looks very clean. I have put the heating on for the first time and we can expect snow and near freezing temperatures for the next few days. This shot is of my ‘back garden’.

In addition to all my other things and doing some more relief teaching last week I went to the early show of the new James Bond film at the Sony Centre in Potsdamer Platz. All films are shown in the original language so that I why I go there.

I liked the film but Jan didn’t. This is what Jan posted on his blog two days ago —
“Furthermore we had at the new James Bond. I must warn everybody: DO NOT GO!!!! to this movie. It is nothing special and not comparable to any other 007 movies before. “

Go and see it yourself. The story follows on from the last film and is much shorter. Heike yesterday said she had heard people complaining that it not like the older films with Roger Moore as Bond. Good for I never went to see those, but Bond as a harder character portrayed by Daniel Graig gets my vote each time. Have fun at the cinema.