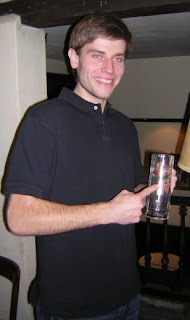 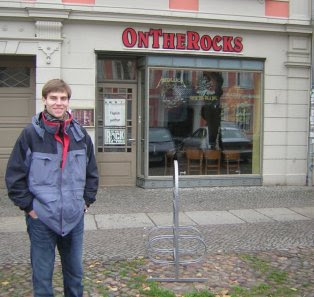 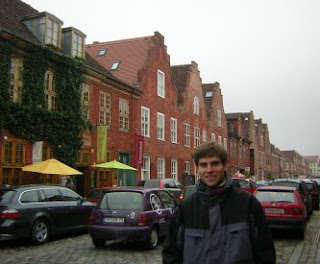 I met Peter in Potsdam yesterday
A gray and chilly day opened as I boarded a train and headed off to Potsdam. I had arranged to meet Peter, who some of you know I call Peter von Longlegs because he is tall! I hadn’t seen him since last Christmas when he had a break in Berlin from studying in Chicago. He is busy writing a paper for his ‘Diplom’ in Economics. He also has a part-time job and still has some lectures to attend.

It was really great to see him again and chat as he took me around the old Holland Quarter near the centre of Potsdam. We continued some very interesting discussions over a ‘deftiges’ lunch and beer.

One photo we took for Jan in Rhode Island. It is of an empty glass of Wernesgrüne just to remind him that the beer really is better here! The others are of the old areas we were in including Peter in front of his favourite pub which features Heavy Metal Music!

He will complete his degree work by Easter and then he plans to study for a doctorate. Very nice Peter and I am just waiting to be able to call you Dr. von Longlegs!