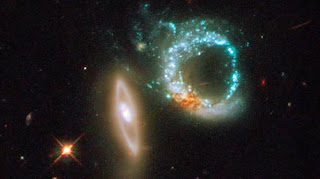 Ending the month on a BANG!

I know I am reporting on the first of November but I found this wonderful image at the end of October. Isn’t it superb?

It was taken by the 18 year old space telescope called ‘Hubble’, when scientists on earth activated its two back up cameras, after the main ones failed a couple of weeks ago.

The picture has been described as a pair of interacting galaxies that appear to form the number 10. I wonder what other wonderful sights Hubble will send before its batteries finally empty.