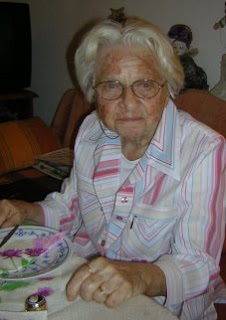 Frau Pirow celebrated her 90th birthday last Wednesday. She lives in the flat below mine. I took her a flowering plant as a gift. She was very grateful and asked me to come on Saturday for ‘Kaffe und Kuchen’. And so I did.

I took this photo as she asked me about my family and we got to know each other better. She told me an interesting story about life in Berlin during the war and just after when there really was a fight for survival. She showed me a photo of her marriage. Her husband was in uniform and I commented that her grandson looked like him. She smiled proudly to hear that.

He was sent to the Russian front just before she heard that she was pregnant. She had a daughter who he never saw except on a photo. She discovered that her husband was in a prisoner of war camp in Russia and so had a photo taken of the baby. She went to a Russian officer responsible for her part of Berlin and asked for it to be sent to her husband. The officer did this.

How did she know? Her husband sadly died on a train transporting soldiers back to Germany in 1947. His personal things were sent to his wife – including the picture of the baby he had never seen. What a story.

She studied typing and stenography and worked all her life. What a coincidence that I am starting Part 2 of my touch-typing course tomorrow!