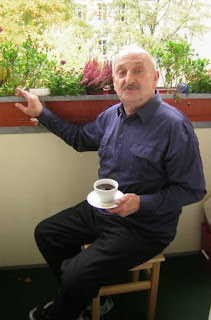 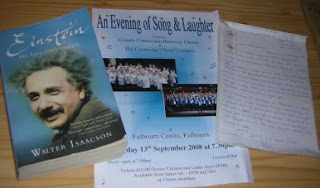 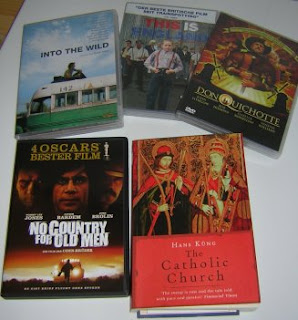 What an interesting mixture! First I got a call from Micha saying he had problems with his computer and writing a letter, so I suggested he came to me. He agreed for sometimes he has enough of his flat and wants to look at another four walls. I can understand his problem!

And so Micha came, and I got my old practice computer from the balcony and put it on the table so he could practice. The main problem with Micha is that he doesn’t listen, and that he is trying to do step 2 before he has learnt step 1. He came and we sorted out his problem. In-between we had a number of cups of coffee, he had a few cigs and I had a few minutes to think about learning problems for ‘seniors’.

I took this phot0 as he relaxed on my balcony with a cig! Now he has another problem so I am going to visit him tomorrow, after Daniel comes here to help me with Spanish pronunciation!

What a surprise! I got a nice package from my no-techi sister, Pauline, on Friday. She sent me a book she had read about Einstein, details of her choir and their performance and of course, a nice letter!

Finally, I have added a photo of a book I have just read – it is about the Catholic church and shows how debased, cruel, murderous, deadly and vindictive it became. It was written by a Catholic theologian and not an atheist! I wonder if the catholic half of my family have read it! I suspect they just go through the ritual each Sunday with no thought about what they are doing nor about the serious issues raised in this book.

Interesting that the term ‘Roman Catholic’ is a contradiction in terms and appeared after the Protestant break away – rather like saying it is a part of the whole, but the whole no longer exists. First the loss of the eastern church then the loss of the church in the north. Well worth a read.

You can also see a few DVDs I have just seen. I can really recommend ‘ Into the Wild’ and ‘No Country for Old Men’. Wonderful stories and well made! Get them immediately! And now to the pics.