This week and Oldie Rolf 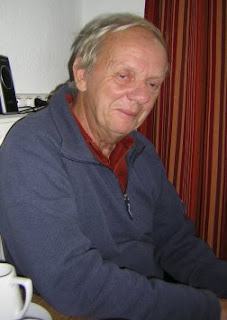 This week started with seeing Hans. He was okay with nothing to say except yes and no to questions. The big thing was taking him to a hairdresser and then to one of his favourite restaurants because he can eat liver there! Small pleasures make most of us happy!

That evening I went to my new Spanish course. I decided to go to another to give myself a push, so now I have a lesson each Monday and Thursday. The Monday teacher comes from Peru and so pronounces ‘c’ as ‘c’ and not as ‘th’ — as in saying Cecilia as against Thethilia which is what my teacher from Spain says on a Thursday. Got it?

Yesterday I went to sort out Oldie Micha — he was pressing the wrong button to try to turn on his new-old computer. I think he also needs new glasses! I took the opportunity to spend some time with him and practice the same thing over and over … and over again! He’ll get there – the rest of us did!

Tomorrow I am doing some relief teaching at the institute on the Ku’damm. Birgit used to work there and I like the atmosphere for teaching and being able to experiment. Then I have my Spanish course, rush to my Photoshop course and then meet Oldie Hermann in a restaurant and relax over a plate and a beer. On Friday and Saturday I am going to a Linux course. I think it is time to learn something about this operating system given that my Baby Asus runs on it.

This morning Oldie Rolf dropped in. He is part of the extended family of Oldies you get to meet through other Oldies. He had to go to a specialist doctors not far from where I live and called in after for a coffee and chat. He told me more about his boat and the problems of having ten grandchildren including cost of birthday/Christmas presents. On a lighter side he talked about his boat and promised to send me a pic so I can share with you later. I wanted to go on the boat this summer but it didn’t work out. Hopefully next year.

Here is the pic and then I shall post the latest about Paul.