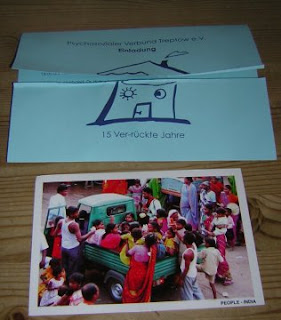 I got an invitation and news of Paul.
Last week I got a postcard from Paul and I went to the 15th anniversary party of the founding of PSV which is the organisation running Hans’ home and many other projects.

Hans arrived late from seeing his mother and sister in Rostock, but was still able to join in the fun and enjoy the delicious foods on offer. It was good for me to get to know other co-workers.

Paul has left Kerala in the south of India, and become a fan of the country and people. He has experienced it realistically, in terms of its social and other problems, by getting to know the people and culture from the inside.

He sent me the postcard from Delhi where he was getting visas to visit —– Pakistan, China, Uzbekistan and Kirghizstan. He ended by saying he was looking forward to the cool of the Karakoram. Nice, Paul and take care of yourself.