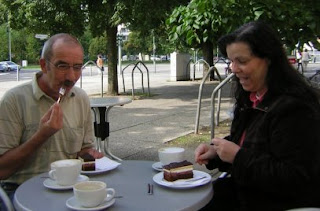 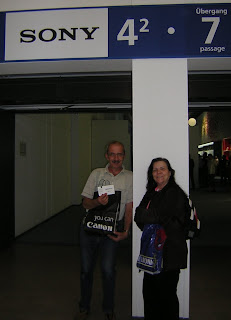 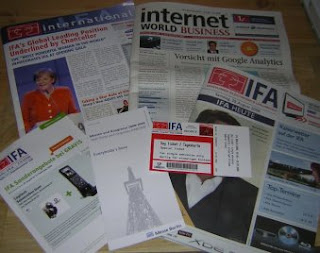 Leaving Birgit’s grave and our coffee and cake break, we went on the S-Bahn and ended up at the huge exhibition centre to visit the IFA. This is the world’s largest exhibition of consumer electronics. Heike works in the wonderful world of computers and all things electronically associated including printers and cameras – her pet interests!

I had never been to an IFA before so I found it like Pandora’s Box = a treasure in each hall. I can imagine spending three days there just to see all the halls and presentation. I saw the new LG netbook which comes onto the market at the end of the month. I had seen this in a ‘techie’ review a few days before and wanted to see it. Heike was particularly interested in cameras and mobile phones and what they could now do as well as different functions offered by printers.

I use an old but good HP laser printer in black and white with a smaller back up in the cellar in case of problems, but I was most impressed with the much smaller multi-function machines offering colour and all kinds of things. Perhaps I should update my printer sometime, but at the moment it does everything I want of it.

It was nice to spend the day with Heike and Burkhard and more than once I thought that Birgit would have enjoyed the time with us – even though she was not a ‘techie’ person! But then she had a good computer system and used computers and the internet in her teaching, so perhaps she would have been the biggest ‘techie’ of all had she been with us. Pity she wasn’t!