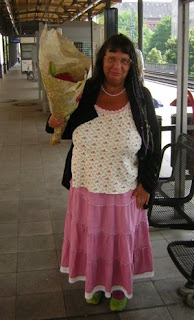 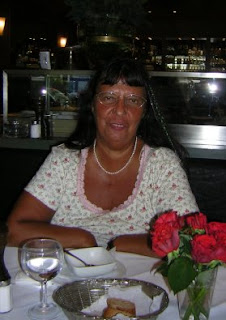 Wednesday 27 August. Jan left Berlin for Dusseldorf and then to New York. It was also the 4th anniversary of Birgit Gast’s death. Still sadly missed. I am meeting her sister, Heike, on Saturday to put some flowers on her grave.

This was also the day I met dear Nicole to celebrate her birthday. We used to work in the same language department – she teaches French. She and Stipo are now back in Berlin after spending some time in her ‘Heimat’ of France, where they stayed with Peter and Hannelore at their house in Claviers, a village of 600 souls in the south of France.

We arranged to meet at Savigny Platz, which is one of Nicole’s favourite areas for restaurants and shops selling interesting and often unusual, but expensive, things. We found a good restaurant near the S-Bahn offering a set meal a la French style – which got the thumbs up from Nicole! Very good and could happily go there again. Pity there is nothing like it where I live!

We caught up on all the gossip and she told me I really should go to visit Peter and Hannelore. The problem is transport. I could get an easyJet flight to Nice but that is 100klms from their house and there is no bus service in the village. Mmmmh … first I’ll call them and find out if they will be at home in October then I’ll sort out the transport problem.

We agreed to meet more often given P and H have moved to France and we ususally met through them. A happy time and you can see that in her smile.