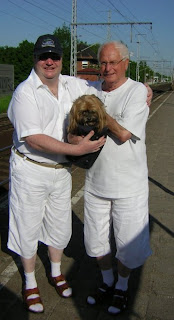 Just after my Big birthday I was invited to visit Wörlitzer Park. The offer came from Horst and Thomas. We fished around for more Oldies but they were either on holiday or had other things to do so we met and set out for a day’s adventure.

I knew nothing of this area but I soon learnt/learned. It is to the east of Dessau near to the river Elbe in the federal state of Saxon-Anhalt. It was one of many small areas then making up what in 1871 became known as Germany. When the park was created it was a ‘Dukedom’ or ‘Principality’ under the political direction of Prussia based in Potsdam/Berlin in the early 1700’s.

Apparently the Duke had some kind of connection to England. Let’s not forget that the Duke of Marlborough had led an English army around the area with the support of the Hanover Kings and they later became the Kings of England following the death of Queen Ann. Sorry that I don’t know more, but for me history is more than that of Kings and Queens and if I had my way I would hang the lot of them!

Anyway, this Duke person galloped around the south of England and saw some new garden layouts, including that of the above mentioned Duke at his new estate, and decided it was really great and he must have some of the action and so when he got back to Dessau he told the local workers/prols to get their hand dirty and build a park including a ‘small’ palace for himself.

The place is really important to historians of architecture and garden layout and I have to admit I would be happy to live there! Nice and relaxing but you would need a bit more than the pension I now have to keep the whole show on the road. I can imagine swanning around the place, including floating around on the small connected lakes and canals and listening to baroque music while sipping champagne and commanding a servant to peel me another grape!

Back to reality and the pics I took. We start the show with a pic of Horst and Thomas at my local station – with Horst’s aging and infirm little dog in a basket. For some reason his wife would not have der Hund for the day so we had to put up with it wheezing and whining in a basket they carried around.