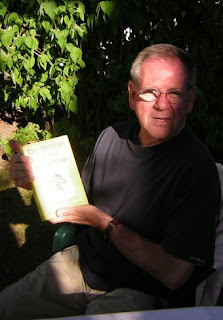 Sunday 29th June 2008.
All of Germany – and I guess Spain – is settling down for the BIG football match in a couple of hours. Jan is with Arancha at her home in the north of Spain, so we can only guess the divided loyalties he is feeling. On the basis of play so far the winner will be Spain, but then other unknown factors come into play. My problem is that I would like both teams to win for very different reasons – but that is of course is not possible!

Peter von LongLegs is back in Berlin-Potsdam after nearly a year studying in Milwaukee in the USA. His English was good before he went but now it is really good. How do I know? We have ‘Skyped’ over the period of his stay and I have read a 34 page academic paper he wrote – very interesting content. Welcome back Peter and I look forward to seeing you when you have had time to relax and see Saskia.

Peter back in Berlin, Jan still in north Spain, the rest of the gang in Germany at the moment, but, Mathias and Sylvana in London visiting her sister and family – I hope they can see the match on the plane for they are returning just at kick off time.

I have been busy for the last few days trying to work out what Facebook is. I was asked to join by my nephew Andrew so that I could see all the new photos of his lovely daughter Scarlett. I have send a number of photos to my new Facebook account with text so that Andrew and Adele know where they are are what is happening in the picture. Peter ran a very interesting Blog when he was in the States, but this Facebook system is rather different.

This makes me think about the future of this blog. It has NOT been a success. I closed my 6 year old private web page at the start of this year and planned to use this blog as a newer format to communicate with family and friends. I have never found the motivation to work on it and I have had no response from anyone since the end of 2007. I wonder if I change it to display p…o pics on my back end, will I have more readers, responses and communication? I’m thinking about this one.

The main thing for me as I moved into 2008, was the BIG birthday in May and my change of status. There were some paperword problems which have now been mostly cleared and so I am getting used to being a ‘Rentner’ – ‘Pensioner’. I note that my phone rings less and I no longer have to plan my day/week as I did. I have also started to read even more books than before.

I got a really great one from Mathias and Sylvana. They ordered it from Ireland and it is called ‘The History of the O’Dwyers’ and written in 1933 by Sir Michael O’Dwyer, just three years before he was killed for his part in the Jullianwallah Bagh massacre of 1919 in Amritsar. Yes, ‘uncle’ Michael was the Governor of Punjab Province then and gave the order to send out the troops. If you have seen the film called Gandhi directed by Richard Attenborough, then you have seen his version of the events in the middle of the film. There is a photo of me with said book in this post.

All for now. Keep smiling.